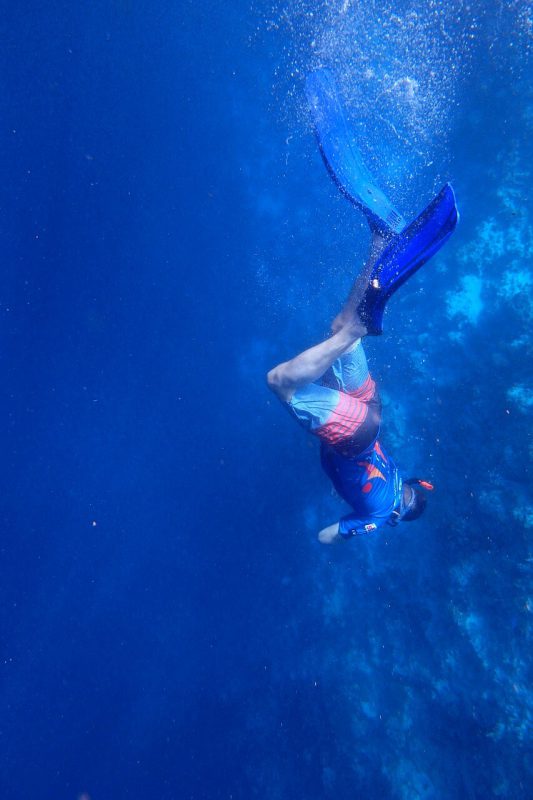 Hello everyone and welcome to my website. In this article, I thought I would share one of my scuba diving experiences with you just for your entertainment and enjoyment. So I hope you like this and if you do and would like to hear more then just leave me a comment below requesting more and I will gladly write some more similar articles.

Ok on to the story then.

This goes back many years to the 1980’s. Myself and 3 friends decided to go do some spearfishing out on a reef that was about 40 feet deep. Just so you know, the only spearfishing I do is taking what I am going to eat and nothing else. I am not a trophy hunter.

Anyways, we all gathered together on the shore in the morning. It was a bright sunny day with a slight offshore wind that was causing a bit of chop out in the water. 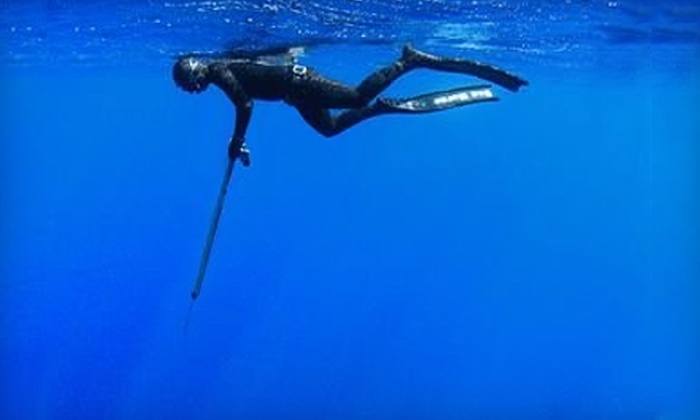 The dive site was a good mile and half swim out into the bay and the reef was at about 40 feet. So we sat around and started to discuss the dive and how we are going to do it. It is always important to go over the dive plan before the dive to ensure that everyone is up to speed.

The plan was to get enough fish for lunch and dinner that evening. We would swim out to the reef with one person leading the way and the others to keep an eye out for dangers. We had to cross a deep gully on the way that was known for its Ragged Tooth sharks which are mean-tempered animals and very territorial. Oh, and did I mention they were big? Well, they can get really big like 12 feet long. That is a lot of shark, lol.

Once the plan was established we geared up and entered the water. We were free diving so no scuba tanks or BCD’s etc. Just wetsuit, weight belt, and spearguns. Ok, mask, snorkel, fins, dive knife and fish buoy as well, lol.

The swim out was gorgeous! The water was warm, around 78F and visibility was about 40 feet which was great. It was a brilliant sea green color and the chop was causing a little difficulty, making you work a little harder but otherwise it was a great swim. We crossed the gully without incident and proceeded to the swim the rest of way.

We were crossing over a section that was about 180 feet deep when out of the blue an octopus came swimming up towards us. It was fair sized, about 5 feet from head to tips of its tentacles. We were swimming in a rough “V” formation and as the octopus came into speargun range I had a sudden thought …. “Lunch!” 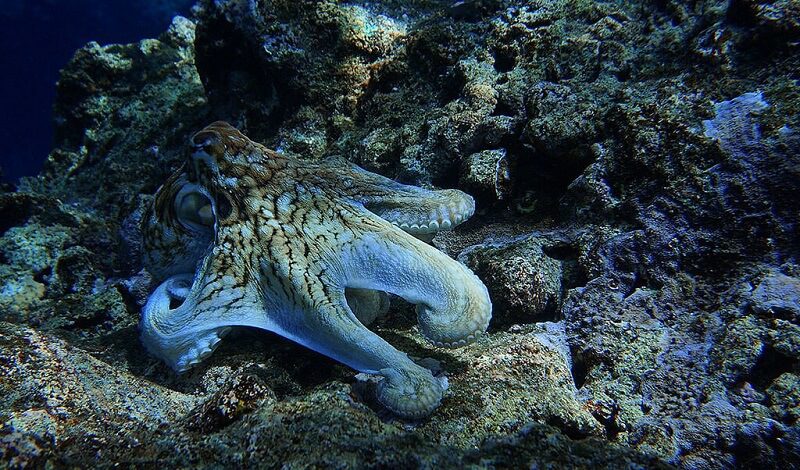 So I took careful aim and fired my gun. To my surprise, I guess that two of my friends must have had the same idea because the next thing I know there are three spears sticking out of the octopus. Surprised the hell out of me, lol.

Well, we got our spears all sorted out and I put the octopus on my fish buoy. BTW – A fish buoy is a small buoy, about a foot or so in diameter with a fish stringer mounted under it and it is attached to a piece of line about 15 – 20 feet long and attached to your weight belt. We do that so that if a shark attacks the fish we bring back they do it away from you and you just drop your weight belt and swim for the shore.

At the reef, we began our dives looking for fish. It was a good day as the reef was really alive with life. There were even some 50+ lbs Muscle Crackers, but we were after some smaller fish that day. We all dive except for one who watches the fish buoys and then we would rotate turns watching and diving. The reef rose up from the sea floor, some 240 feet below, like a mountain ridge and plateaued out about 80 feet wide and 100 feet long. 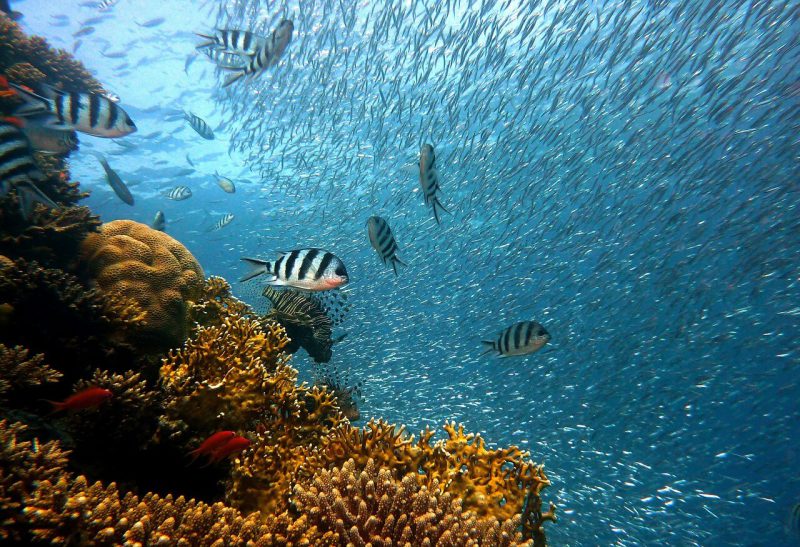 The top was pretty flat except for a ridge that rose out of it about 8 feet high and 20 or so feet long. I was diving this ridge looking for some fish when I spotted a nice 20 pound Butterfish at the corner of the ridge.

I swam along the ridgeline below the summit and took aim. Just as I was about to shoot the fish disappeared around the corner of the ridge. I swam up to the corner but could not see it anywhere so I surfaced again, got some air and dove down again to the ridge.

Sure enough, there was the fish again at the corner of the ridge. Again I took aim and the darn fish disappeared around the corner again so I gave chase and chased it all down the backside of the ridge to the opposite end and he disappeared again on me!!!

Now I was on a mission! I swam back to the other end of the ridge and there he was again just hanging out. As I took aim he shot around the corner and I gave chase again. As he was about to go around the corner again though this time I took the shot. 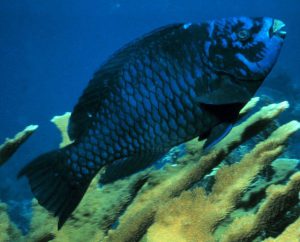 My spear streaked out to him and he made the darn corner before it got there and I ended up missing him. But there was a small Parrot fish coming the other way and my spear hit him and went right through so that the fish ended up on my line. I made for the surface towing the small fish (and I mean small, maybe 2 pounds, lol) behind me.

My friends all laughed at my “prize” and I managed to get the fish off of my line. I then tossed the fish away from me and it landed like 2 feet from me, lol (not my greatest toss). Anyways I was resetting my speargun, with this dead fish floating about 2 feet from me, when out of the blue this shark hits the fish, slams into me and darts back down to the reef. Scared the living hell out me!! All I saw was fish … big teeth, mouth …. and shark. 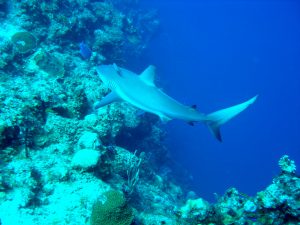 The good thing was after I managed to get my wits back I saw that it was just a small reef shark, about 5 feet in length. But the little guy about gave me a bloody heart attack, lol.

Anyways, we all got a good laugh out of that and went on to finish our dive. I never did get the darn Butterfish but I did get a nice 32 pound Muscle Cracker to take back to shore. The swim back was uneventful and we made the shore by about 1 pm.

Then the fun began of cleaning the fish and getting it ready to cook up on the fire. After that was all done we rested up a bit just basking in the sun and talking about the dive. Then we went and did some snorkeling along the shore and collected some Ollie Crocks (Giant Sea Snails) and Abalone to go with our fish and octopus. 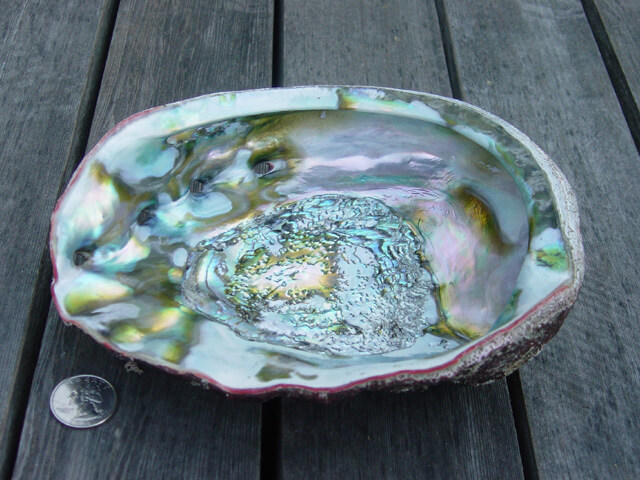 That evening all our friends showed up and we had a grand cookout on the beach and enjoying each others company. My friends all got a good laugh out my spearfishing episode that night too.

Well, I hope that you enjoyed the story and if you liked it I will be happy to write more. Please just leave me a comment below and I will gladly respond to you. I wish you all well and hope to see you in the water soon.